More than 1.3 million refugees and migrants have sought safety and refuge in Europe since 2015. The majority of refugees and migrants travelling to the EU come from Syria, Afghanistan and Iraq. Other nationalities include Nigeria, Eritrea, Pakistan, Cote d’Ivoire, Gambia and Guinea. Conflict, instability and human rights abuses in many countries have triggered population to seek a safe haven from elsewhere. Often people are arriving in neighbouring countries which are unable to cope with the massive influx, so many of these refugees choose to continue their journey north and west towards Europe via either the Mediterranean Sea or over land via Turkey.

In particular, during the year 2016 the number of people who have tried to cross the Mediterranean has been a huge. Around 340,000 people have tried to reach Europe by sea already by mid-November in 2016. Fleeing across the Mediterranean is life-threatening, and 1 in 74 people died at sea in 2016. So far, 2016 has been the deadliest year on record for those crossing the Mediterranean. Almost 90% of the children we have rescued have been unaccompanied.  Children, and particularly unaccompanied children, are recognized as a category especially vulnerable to exploitation and abuse.

Save the Children’s new search and rescue vessel called Vos Hestia launched in the beginning of September 2016. It works in close coordination with the Italian Coastguard to rescue and bring children and adults to a safe port in Italy. The vessel can hold at the same time about 300 people. Once on board, essential services are available to all rescued people including food and water, blankets, and medical care. We provide safe spaces for children on board where our expert staff can help give children the emotional care they need to recover. Vos Hestia has helped rescue more than 2, 200 people from the Mediterranean by mid-November 2016, including more than 400 children

Save the Children works along the whole route that refugees take: we work in countries that are known as ‘transit countries’ like Turkey, Serbia, Croatia, Greece and Italy – ensuring the children are protected wherever possible. We also work in destination countries like Germany and the UK, to ensure that these children understand their rights and have access to care and support. We share the refugees, for example, warm clothing, food and hygiene supplies.

Children are in desperate need for psycho-social support, protection, safe spaces, shelter, food, clothes and water. Save the Children’s the child protection teams at the sea landings provide legal assistance and information to all unaccompanied children, supporting their transfer from disembarking areas to first reception facilities and helping authorities with the assessment of vulnerable cases. We are providing psychosocial support to children and adolescents through the activities inside Child Friendly Spaces and Youth Corners. We also have distributed student kits and arts & craft kits. 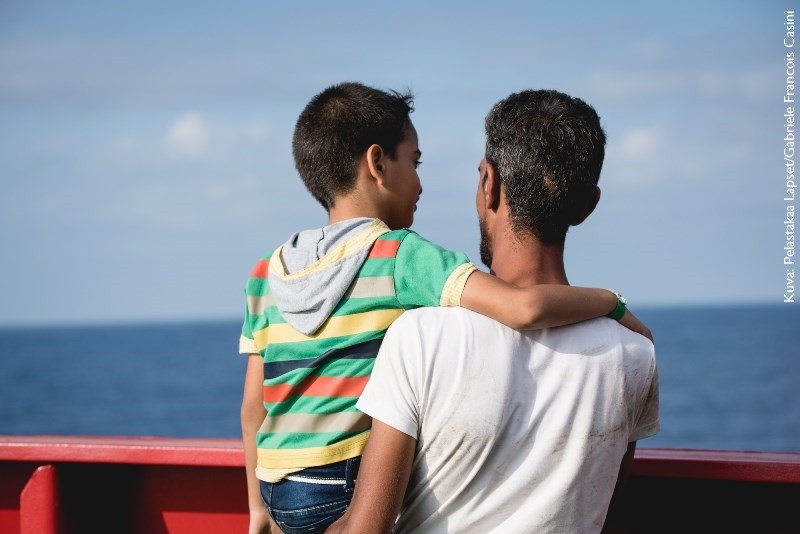 The life-threatening journey across the Mediterranean Sea

Fadi and his family struggled to get by in Syria – he couldn’t find work and his daughter’s medical costs alone were 100 Syrian pounds so around 50 cent a day. He made the decision to bring his family to Europe – putting their lives in the hands of smugglers who lied and stole from them. On the journey, the boat was overcrowded and the engine failed. Fadi’s daughter Amena has severe asthma and her oxygen ran out – one doctor said she may not have survived another hour without help. But Fadi was rescued with his wife and two children – he’s incredibly grateful and hopes to work and pay for his children’s education and his daughter’s healthcare.

Save the Children helped the family to safety from the overcrowded boat, whose engine had failed in the middle of the Mediterranean Sea. In the rescue vessel family received food and clean water. Their state of health was reviewed and the children were given an opportunity to play in a safe environment, so the recovery from a heavy journey could begin. The daughter of the family, Amena also received the necessary oxygen.

People’s names have been changed to protect the identity of individuals.