Save the Children has helped children in Iraq for many years prior to the escalation of the situation in Mosul, in the autumn of 2016. There are approximately 3.4 million internally displaced persons in Iraq and approximately 250 000 Syrian refugees. Even before the escalation of the conflict, the situation has been complicated, and has stretched the capacity of the authorities and the humanitarian community to the extreme. Iraq has a population of 32.5 million people with an estimated 23% of them living below the poverty line. In the autumn of 2016 over 10 million people need some form of humanitarian assistance; half of whom are estimated to be children. Depending on the intensity of fighting and the scale of violence in the months ahead also, this amount will grow at least another million. (Source: UNHCR.)

Battels in Iraq are related to conflict between Iraqi government and ISIS. Iraqi government tries to conquest back to its territories with its allies. Administered areas of ISIS people live in a continuous fear, because ISIS has tortured, repeatedly raped and mass executed people. Children have been used as suicide bombers, human shields and for the human trafficking. Women have been enslaved, and they have been subject to repeated sexual violence. When the Iraqi government gains control of the region again people often experience discrimination or arbitrary property losses. As a result of the conflict between Iraqi government and ISIS, basic services such as schools, hospitals and water distribution have suffered serious problems. 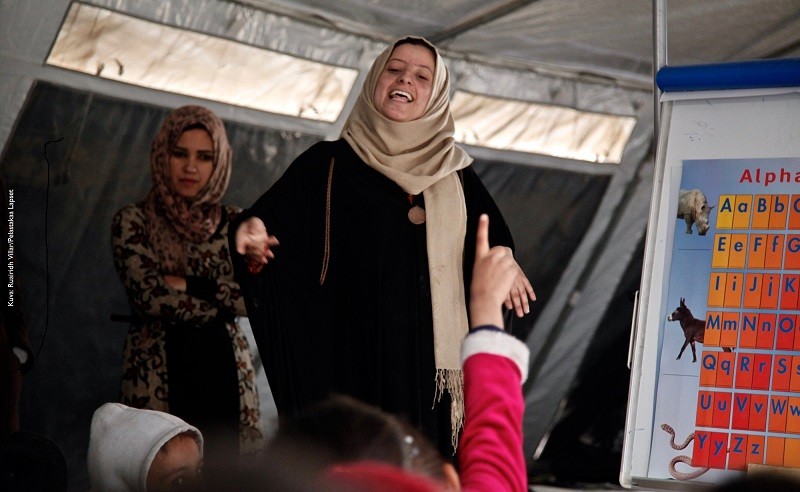 Sabri*, one of Save the Children’s teachers in Qayyarah Jad’ah camp, teaches a group of children. (*Name has been changed to protect identity.)

An estimated 1.2 million – 1.5 million people are living in Mosul in the autumn of 2016, and approximately half of them are children. People in Mosul are in mortal danger and face an impossible choice. The UN has warned that tens of thousands of people will possibly be used as human shields by the ISIS. At the moment it’s too dangerous for most to escape. Distribution of electricity and water has had some problems or has been even completely severed. Children of Mosul have not been to school in almost two years, and they have witnessed indiscriminate violence. Children are likely to be traumatized and in need of psycho-social assistance. Similar battles between IS and the Iraqi army have also taken place in other parts of Iraq.

Save the Children has so far distributed water, food, clothing, blankets and other emergency aid to newly arrived families at refugee camps. We have set up tents that will be used as safe spaces for children to play and learn, and restart their education. We have teachers who are trained in psychological first aid who will be able to identify children who aren’t coping well and will do what they can to support them before helping them to access more specialized psychological care if that’s required.  As the crisis escalates we will be stepping up our response, such as by setting up water and sanitation systems, expanding learning facilities, and helping reunite children who get separated from their families as they flee.

Save the Children Finland has made its contribution to this major operation by dividing emergency kits in the sub district Sinjar, Ninewa Governorate. Our aim is to help internally displaced persons, especially in vulnerable situations, for example, by distributing the Jerry cans and the hygiene kits. In addition, we have supported education and child-friendly spaces in refugee camps.

A family of five escaped from ISIS 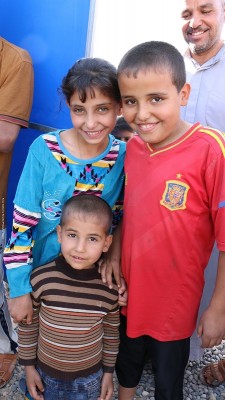 Fayona (11), Fawz (10), Wajeeh (4) arrived in Jad-ah camp 3 days ago with their family. They came with 100 families from a village south of Mosul. ISIS had tried to take the villagers’ north further into their territory – it’s thought with the intention of using them as human shields, according to the UN. Father told us: “Whatever we stopped walking ISIS would shoot at us and we had to keep going.” As the villagers were taken north, conflict erupted between Iraqi and ISIS forces and the villagers managed to escape. Initially all 100 families were sheltered by their tribal leaders in his house but received news that ISIS were coming to kill them so fled to Jad’ah camp.

Father hoped that their children will be able to go to school. Save the Children is helping families in Ja-ah camp by distributing clean water. We are also putting up temporary learning spaces to get up to 800 primary age children learning again.

Iraqi project is funded by the Finnish Ministry for Foreign Affairs.