Somalia is one of the toughest places in the world for a child. After more than two decades of violence and political turmoil in Somalia, the country is on the verge of poverty, and without a functioning state. Although the political situation in the country is currently better, but natural catastrophes remain a major challenge. Last crisis resulting from the natural disasters experienced in 2015. Due to subsequent failed rains, pastoral and agro-pastoral communities in Western Somaliland and large parts of Puntland experienced one of the hardest droughts in the past decade causing massive livestock loss. Western Somaliland and Sool regions, in turn, received in 2016 more than usual rain, which made it possible to pasture and plant regeneration, and on the other hand caused flooding in some places.

In total, about 5 million Somalis are in need of humanitarian assistance in the autumn of 2016, and it is up to 40% of the country’s population. More than 300,000 children under the age of five are acutely malnourished.  It is estimated that nearly 1.9 million people might die of preventable diseases and complications because of the absence of basic health care. For example, the maternal mortality ratio for Somalia is among the highest in the world at 732 maternal deaths per 100,000 live births. Asylum seekers and returnees fleeing the Yemen crisis also continue to arrive in Somalia, and make the situation more complicated.

Somalia’s child protection systems aren’t yet at a sufficient level to reduce the vulnerability of children and to protect children from a variety of risks, such as child trafficking, violence and abuse. Children in poor areas may face child labor, which exposes them to hazardous work conditions, as well as violence and exploitation.

The gender inequality is high in Somalia. Girls are a poor position, especially the less educated and poorer families. Families often can’t afford to send girls to school, and they are forced to marry older men at a young age. Marriage girls often face sexual violence and victims of ill-treatment. In addition, the girls’ genital mutilation is still widespread in Somalia. Behind girls’ poor position are also cultural issues.

For over 30 years, Save the Children has worked in Somalia/Somaliland. We have done both longer-term work, and short-term work, for example, to promote health services and the protection of children. After natural disasters or conflict-affected areas we are doing work relating, for example, healthy nutrition and the promotion of good hygiene.

Save the Children Finland emphasizes its work in Somaliland child protection by strengthening local child protection systems. We will also increase the awareness of the issues relating to the protection of children. In addition, we organize, for example, child-friendly spaces to community centers, where children receive the necessary psycho-social support. We train both children and adults to identify child protection cases, and through it we aim to strengthen community-based child protection mechanisms. We do also advocacy work in the direction of the local government, so that investment in children would grow. We improve children’s self-defenses and implement the child-led disaster risk reduction. In addition, improve children’s opportunities to influence the decisions affecting them.

Save the Children Finland makes also humanitarian work in Somalia. Save the Children Finland has been involved previously in humanitarian work in Somalia, for example, in Mogadishu, Baidoa, Sanaag, and Bari regions. We have distributed the cash support, and clean water to the most vulnerable people. We have also renovated water wells, and trained mothers and communities of children’s nutrition and hygiene. Save the Children also helps families, who have lost their income due to disasters or conflicts, to get new income. 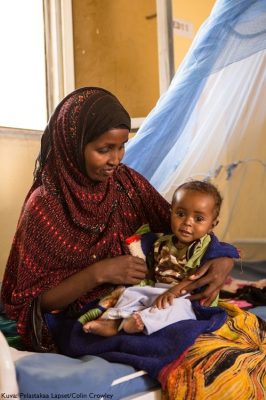 Khadra’s eight-month-old son, Khalif, has been admitted to the paediatric ward of the Garowe General Hospital, in the Puntland State of Somalia He is suffering from severe malnutrition. Khadra had to travel for two days to reach the hospital – it’s her nearest health facility and yet it’s over 90km away from her village. Khalif was sick for two months before Khadra was able to raise the money to make the journey for treatment. They’ve now been in the hospital for an another two months, where she and her and son share a small room with four other children and their mothers, including one child with pneumonia and another with meningitis. There’s not enough room at the hospital and the cramped conditions put all the children at risk of cross infection. Despite everything Khadra says: “The doctors have treated us well. We are fine here and we are getting all the support we need.” 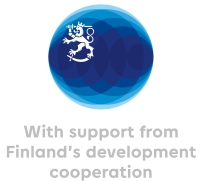 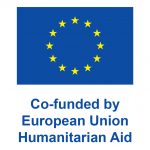