India is the world’s second most populous country, with a population of over 1.2 billion. Although India’s economy has grown rapidly in recent years, the situation of children in the country is still poor. In India every 20 children dies before their fifth birthday. The majority of these deaths are caused by preventable or treatable of illnesses such as diarrhea, malnutrition or pneumonia. In particular, the orphaned children become easy targets of neglected and abused. Often children who come from poor families aren’t getting the necessary support during their development, and they remain in the poverty trap. India also has 12 million child laborers. They often perform physically demanding work in dangerous conditions. More than a million children are not in education. Those who go to school often face overcrowded classrooms, inadequate sanitation and a lack of clean, safe drinking water.

We are working to prevent child poverty

Save the Children Finland is also working in Dungarpur, India to help the poorest children. Dungarpur, a tribal district in Rajasthan, is known for its comparatively slow progress in all human development indicators, and the children’s rights aren’t fulfilled. In Dungarpur, for example, infant mortality rate is higher than the national average, and one in three children is malnourished. Our aim is to make grants that the Indian government to provides more child-friendly, and get also the poorest children benefit from them. We will also increase people’s awareness of the social security programs, and we promote both parents, and decision-makers understanding of children’s rights and needs.

India has a high number of social protection schemes and quite a few of them cater to children. Two important programs are Palanhar Yojana (caregiver scheme for orphans and other vulnerable children), and the Mahatma Gandhi National Rural Employment Guarantee Scheme (MGNREGS), which guarantees 100 days work per year for rural households. Both programs have improved the living conditions of the poorest families, but in some cases even worsened the situation of children. Revenues generated from Palanhar program may not be used for the benefit of children. Another common sight in Dungarpur with regard to children and work is their engagement at the worksites of the MGNREGS. Children were frequently found at the worksites as proxy for their parents and small children were often found left at home due to lack of crèche facilities for the workers. At times, older children were missing school to look after younger siblings.

Save the Children aims to improve the well-being of vulnerable children who participate in Palanhar program. We have developed Palanhar Plus approach, which complements the state’s cash transfers, and supports the children’s parents, so that they can provide safe, healthy and happy living environment to their children.

A series of assessments brought forward the point that merely providing cash was not enough to improve the well-being of children as caretakers often lack the skills to promote children’s development and many children suffer from low self-esteem. That’s the reason why relevant skills are imparted to caretakers as well as children, for example, nourishing food and the importance of proper education. We have also developed a panel study in which we will follow the progress of those participating in the initiative. We are cooperating with the local communities and the schools to monitor orphans’ and other vulnerable children’s well-being. Save the Children also aims to improve MGNREGS program to be more children sensitive. We are also training the representatives of local administrations, who are responsible for the program. We also influence the state government to incorporate recommendations of the Save the Children’s MGNREGS study in the MGNREGS guidelines

By ensuring, that social protection schemes like the MGNREGS -employment scheme are child sensitive and take into account the particular needs of children, it is possible to guarantee and amplify the intended positive effects of the schemes. In Rajasthan, we support the development of the MGNREGS program so that access to child care services and education can be ensured for children to families involved in the employment program. 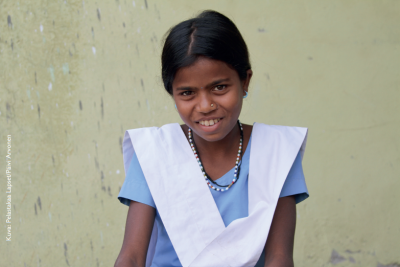 Twelve-year-old Sheela has lost both her parents and lives with her grandparents. The grandfather struggled to keep Sheela in school, but it was difficult to make ends meet. After the grandparents were supported to access a social protection scheme, Sheela is now attends school regularly and hopes to become a teacher in the future.

Indian project related to child poverty is funded by the Finnish Ministry of Foreign Affairs and the Finnish Red Nose Day Foundation.