Myanmar has about 56 million inhabitants, and one third of the population lives under 45 cents a day. Geographically, Myanmar is vulnerable and threatened by various natural disasters, such as earthquakes and hurricanes. Children’s life is shorter in Myanmar, than anywhere else in Southeast Asia. In Myanmar diarrhea, pneumonia and malaria are killing about 90 000 children every year. The country’s investments in health and education are the lowest in the world.

There is a legacy of chronic underinvestment in the education sector in Myanmar. While public investment in the education system in Myanmar has recently improved, many years of underfunding has seriously impacted the education system as a whole. Just over half of Myanmar’s children complete primary school on time, with rural, poor, ethnic minority children, girls and children with disabilities most affected.   Though technically free-of-charge, the costs of uniforms, books and special tutoring makes attendance in the public school out of reach for many families. Thus, charity-driven schools have sprouted to assist those who cannot afford the government system, but, like the government schools, suffer from a lack of funding and skilled teachers. On top of these, teaching methods are out-of-date, and student-teacher ratios remain high.

Save the Children has worked in Myanmar since 1995, helping children to access essential services such as healthcare and education. Save the Children Finland have been working in Myanmar in order to give the most vulnerable children access to high-quality early childhood education by support from the Ministry of Foreign Affairs and Nokia. Special attention is given to most marginalized children (ethno-linguistic minorities, children with special needs). We have built together with local communities in rural villages already dozens of Early Childhood Care and Development (ECCD) centers to guarantee high-quality early childhood education for children. The local communities are involved in both the financing and construction of ECCD centers, and payment of salaries of educators. Save the Children aims to support the beginning of the center for a certain period of time, and then the centers’ activities will gradually entrusted to the local community. This way we will ensure the continuation of early childhood education. At the same manner are also working the children clubs, where parents are trained in matters relating to the treatment of children, when the children are playing under supervision.

We have supported children’s early childhood education and development also by establishing the new Kindergarten Year for 5-years-old children that will help children to prepare for school. In addition, we train early childhood educators and members of ECCD Network Group. We also strengthened children’s ability to read by establishing of libraries in villages, and by printing books that children want to read. We have done also cooperation with the Myanmar authorities. The aim is that, the children’s rights would take better into account in the design and implementation of the education sector in Myanmar, and approaches would be more child-friendly.

As part of the Myanmar’s project Save the Children and Nokia have been exploring together, how we could support the objectives of the project through technology. Although early education groups already operate efficiently they had difficulties to organize and share information about the project. Groups often gather information via paper and pencil, so they are able to share information with each other mainly at joint meetings, leading to problems of knowledge. Through NOKIA support, were developed software to support data collection, management and analysis. The software is available to download for smartphones and tablets. It allows members of the networks to collect to data about the presence of students, and the functions of centers also offline and when the mobile device is online it sends data automatically to the common database. This allows us to view the project activities more extensively.

In ECCD center child learns that will benefit the whole family 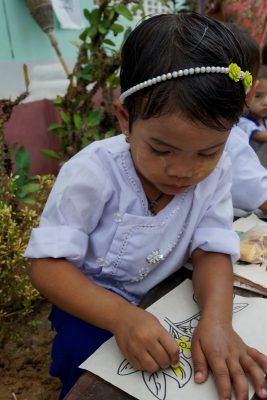 Four-year-old Cherry Oo is shy but she likes to tell stories and an avid drawer.

These skills she practices in Goe Gwani village’s ECCD center, which was opened as part of the Save the Children’s early childhood education project in 2015. In the village’s ECCD center has a total of 47 children and the daily rhythm is very similar to the Finnish kindergarten: The children play outside and inside, sing and draw. Between all this they eat lunch and sleep.

Cherry’s mother Aye Hmim, 27, is already happy with the way the regular kindergarten visit has affected her daughter. “My daughter has learned manners here. She hit anymore and is able to share toys with others. She takes her shoes off when entering into house, and leaves them neatly into the hall. She has also taught hand-washing and other hygiene things to the rest of the family, “she says.

Myanmar’s project is funded by Nokia.