Bangladesh is one of the world’s most densely populated countries, approximately 156 million inhabitants. More than a fifth of the population lives below the national poverty line. Poverty has driven more than every 10th 5-14-year-old child to work. Many of the children are working extremely hazardous conditions. Although the number of children who go to school has risen significantly over the past few decades, about 20 % of the children still interrupted their basic education. Bangladesh has developed several social protection schemes, capable of breaking the intergenerational transmission of poverty and to raise families out of extreme poverty. However, these social protection schemes haven’t reached the poorest.

Save the Children Finland is working in Bangladesh to help the poor households and children. We are working in Mymensingh and Netrokon districts. The living conditions of poor children and their families have been improved by promoting the poorest households’ access to state’s social support, and to other services. We have increased transparency of social protection, and enhanced families awareness of social security programs which belong to them. Education scholarship, maternity allowance, widow’s pensions, and other forms of support granted by the state have eased the economy of the poorest families.  This has had a direct impact on the well-being of children. The authorities have been trained in order to become better, to take account of the child’s interest in their income transfer programs. Awareness of local communities and parents about child labor disadvantages, role of parents as educators, and the importance of education have been added through education and information campaigns.

Save the Children has established village schools, whose activity has been maintained, for example, through the acquisition of learning materials, hiring and training of teachers. This has made it possible, for example, for the child laborers to return home and go to back to school as well as to reduce the departure of new child laborers from the village. In these village schools in organizing teaching is taken into account, in particular children, who have never started their studies or whose education has been interrupted. In addition, we have supported state’s schools to develop teaching more child-friendly. For this purpose we have trained the authorities, parents and community members so that they could pay more attention to children’s needs in their plans and activities in the future. In addition, Save the Children has supported the children’s extracurricular activities.

In 2016, Save the Children focused its efforts on the stability of the results already achieved by increasing funding for the local authorities to the village schools, children’s clubs and training sessions targeted to parents. In 2017 our operations in Bangladesh goes on a smaller scale and most of the financial support from the Red Nose Day Foundation will be targeted to our work in India. Read more about our work in India. 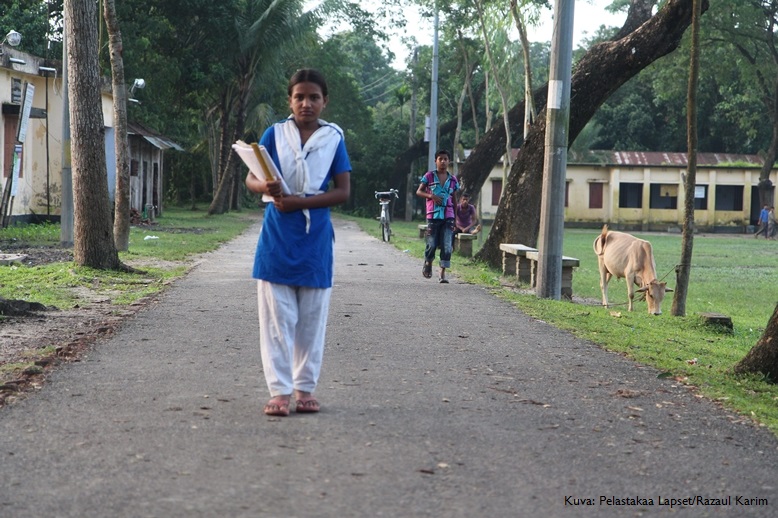 Shoma (pictured in the foreground) got a second chance to attend school by help from Save the Children.

4-years-old Mariam lives with her mother, father, two siblings and grandmother. Mariam’s mother is disabled, she paralysed after Mariam’s birth so grandmother looks after Mariam quite a lot and Mariam is very attached to her. Her mother gets disability allowance. During earthquake in 2015 their house collapsed completely. The family is very poor and they are Dalit. Mariam attends a school regularly.

Save the Children has helped Mariam and her family in many different ways. We have trained her caregivers how they could keep better care of Mariam and his nourishment. We have also encouraged Mariam’s family to take her to regular growth monitoring at health post to make sure Mariam is growing well. Before as grandmother said that they fed her only once per day and sometimes they left her at home on her own when went to work. Mariam’s grandmother attended parenting education sessions and learned that the Mariam should be fed 4 times per day and with healthy, nutritious foods. In addition, with our support, Mariam was provided access to Nepalese government social protection scheme ”child grant”, which belonged to her. Her family just didn’t know about child grant before. The family uses the money to buy vegetables and more nutritious food, which they couldn’t afford otherwise. Save the Children also provides Mairam meal package for the school as well as school materials. Today, Mariam grows well and is healthy and happy child