The conflict and humanitarian crisis in Syria are pushing an ever increasing number of children into exploitation in the labour market, and much more needs to be done to reverse the trend, according to a new report released by Save the Children and UNICEF. 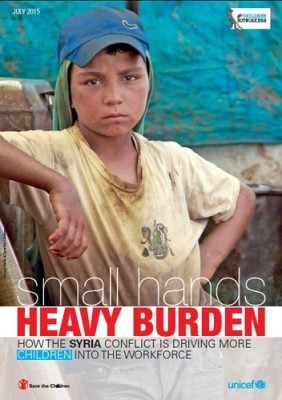 The most vulnerable of all working children are those involved in armed conflict, commercial sexual exploitation and illicit activities including organised begging and child trafficking.

“The Syria crisis has dramatically reduced family livelihood opportunities and impoverished millions of households in the region, resulting in child labour reaching critical levels,” says Dr Roger Hearn, Regional Director for Save the Children in the Middle East and Eurasia.

“As families become increasingly desperate, children are working primarily for their survival. Whether in Syria or neighbouring countries, they are becoming main economic players.”

The report finds that a spiralling number of children are employed in harmful working conditions, risking serious damage to their health and wellbeing.

“Carrying heavy loads, being exposed to pesticides and toxic chemicals, and working long hours – these are just some of the hazards working children face every day around the region.”

Three out of four working children surveyed in Jordan’s vast Za’atari refugee camp have reported health problems at work, according to the report. A further 22 per cent of children casually employed in the agricultural sector in Mafraq and the Jordan Valley have also been injured while working.

Moreover, children who work are more likely to drop out of school – adding to fears of a “lost generation” of Syrian children.

UNICEF and Save the Children call on partners and champions of the No Lost Generation Initiative, the wider international community, host governments, and civil society to undertake a series of measures to address child labour inside Syria and in countries affected by the humanitarian crisis.

“Syria’s children are paying a heavy price for the world’s failure to put an end to the conflict”, the report concludes.