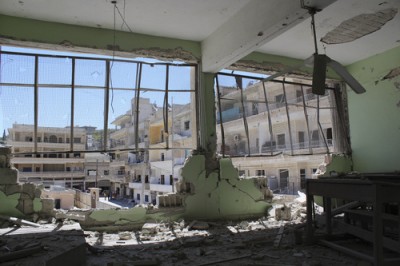 The agencies today released a scathing critique of the UN Security Council powers detailing how they have failed to alleviate the suffering of civilians in Syria amid intensifying conflict four years after the start of the crisis.

Despite three Security Council resolutions adopted in 2014 that demanded action to secure protection and assistance for civilians, humanitarian access to large parts of Syria has diminished and more people are being killed, displaced and are in need of help than ever before, according to the report “Failing Syria”.

In the hard-hitting report agencies present a score card that compares the demands made in the Security Council resolutions last year, with the reality on the ground. The grim statistics reveal how the resolutions have been ignored or undermined by the parties to the conflict, members of the Security Council and other UN member states, leading to the worst year of the crisis for civilians:

“The bitter reality is that the Security Council has failed to implement its resolutions. Last year was the darkest year yet in this horrific war. Parties to the conflict have acted with impunity and ignored the Security Council’s demands, civilians are not protected and their access to relief has not improved,” said Secretary General of the Norwegian Refugee Council Jan Egeland. 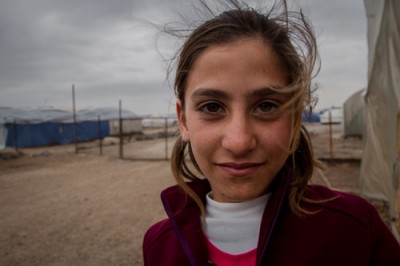 Rima*, 12, and her family were displaced when armed groups attacked their town in Iraq. Now at a camp in Northern Syria she likes to spend her time at the Child Friendly Space being run by one of Save the Children’s partner organisations. ”I often miss home. Luckily I have lots of friends here who I can spent time with. Photo: Mark Kaye/Save the Children

Fewer people were reached via inter-agency convoys from Damascus in 2014 compared to 2013 (1.1 million compared to 2.9 million), and less than half of the requests were accepted by the government of Syria. Some assistance has been entering across the borders from neighbouring countries, but out of Syria’s 34 border crossings, only five are currently open for humanitarian convoys, nine are restricted and the remainder are closed.

“Across Syria, children are missing out on their education because we cannot reach them, many schools have been destroyed and parents are afraid to send their children for fear their schools will be attacked,” said Save the Children’s Regional Director Roger Hearn. “While heroic humanitarian workers risk their lives to give essential aid and services, millions of Syrians remain out of reach, not only because of fighting and a worsening situation but also because of lack of funding and bureaucratic hurdles.”

The humanitarian organizations are calling on UN member states, including the permanent members of the Security Council, to go beyond words and ensure the resolutions are fully implemented. 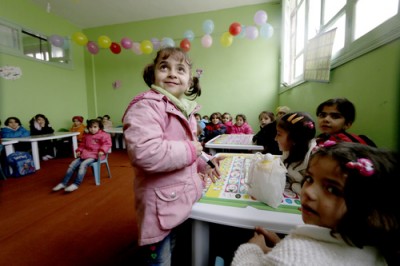 No’ma*, 6, and Laila*, 9 are sisters from a town near Aleppo in northern Syria. The girls and their family had to flee their home because of the heavy fighting. Now the family would like to seek asylum in Europe. Both No’ma and Laila have been able to continue their education at a school supported by Save the Children. Even though No’ma has difficulties speaking and hearing, she is very active in class and has many friends. Photo: Khalil Ashawi/Save the Children

“The Security Council’s words now ring hollow. The last year has seen little concrete action from parties to the conflict and governments with influence to tackle the spiralling humanitarian crisis in Syria. What good is a resolution to a mother whose house has been bombed and children are hungry if it is ignored and undermined? It is time for powerful governments to stop fuelling the conflict, significantly scale up humanitarian assistance to meet people’s immediate needs and push the warring parties towards a political solution. Russia, the US and other states have the political and diplomatic influence to make the changes set out in the resolution real; there is no more time to lose”, said Andy Baker, who heads Oxfam’s response to the Syria crisis.

* The names have been changed to protect identity.